Your heart starts beating nearly uncontrollably as the countdown signals your entrance.

You take a deep breath, toss shoulders back and swing aside the curtain.

Focused… you sense applause as you head toward the spotlight greet to your dance partner. You catch each other’s eyes, smile and off you go… to entertain the audience and raise money for charity. It’s “Swingshift and the Stars.”

DANCING from your hearts.

One year ago today I experienced that joy and fear. I stepped out of my comfort zone into a world of “ballroom” dancing for a charity dance-off. 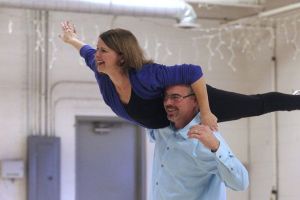 What an adventure! Through hours of rehearsal and perspiration, my partner and I developed a mutual trust. We agreed to attempt  “lifts” I swore I could never accomplish. See that girl on the man’s shoulder? It’s me! I call that the “Peter Pam,” as it was the closest I ever felt to flying. 😉

Yes, I have taught dancers how to safely perform lifts, and I have done too many to count as a young dancer. But 20 years and three children later… this was a big, nerve-wracking decision!

For me, it’s what life is all about. Dance is a gift of art and self-expression that must be shared. Because I live that philosophy, I know that dance on the highest levels requires balance, grace, coordination, and athleticism. To me the most important elements are your emotional commitment and the passion behind the movements. I believe this applies not only to DANCING but everyday life. We need more passion in our actions!

Through these performances I learned that facing fears directly can be exhilarating and intensely satisfying when you achieve what you never thought possible, or had been afraid to try. And that is what my run on the charity dance-off “Swingshift and the Stars” accomplished for me. I competed as a dance professional in the four-month-long  charity dance-off. I was paired with a local celebrity. We invested over 5 months of rehearsals. It allowed me time to learn new steps and then teach them to my celebrity partner, a self-proclaimed non-dancer. We mastered intricate routines for the four separate competitive events in which we were to compete. 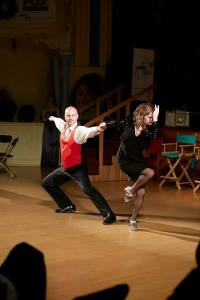 I personally learned four different dances; each with its own rhythms, footwork, arm holds, turns, emotion, character and styles. First was a Fred Astaire and Ginger Rodgers-inspired Foxtrot, followed by a John Travolta-inspired hustle. For the country-themed event we performed a West Coast Swing. The finale was a spicy, very spicy Latin Bolero (waaaaay out of my territory) but I DID it!!

With the support of fans and sponsors, and the votes of judges, our hard work brought in over $130,000 for Leelanau Christian Neighbors!! I believe when you put your heart into something (whether its dance or something else) you will be rewarded for your effort. For this event, our community joined together, for an all-time record. Over $300,000 was raised for the 2014 season. 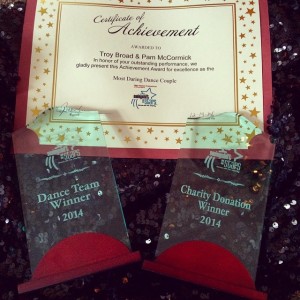 We did it! I did! The community did it! And what we achieved for the charities fills my soul to the core.

Overflowing with gratitude a year later, my heart continues to fuel my daily life with family, friends and teaching. Returning to the event for this season as a judge has already touched my heart in ways I didn’t expect. I know how hard these couples are working (along with everyone else behind the scenes). I get a little choked up thinking about the impact they will make for their charities and the precious folks they will help.

YOU can make a difference too…in those tiny moments, in those big moments and just by offering a smile to someone.

The music is starting…

Join me as we all grab each other’s hands, listen to our hearts, find that passion to drive our action… and DANCE!!!